A familiar sight for all those who spend their holidays on the Moselle: The castle ruin Landshut, which towers majestically over the old town of Bernkastel-Kues.
A visit to the castle ruins is rewarded with impressive views of the magnificent Moselle cultural landscape. Landshut Castle Ruin is not only one of the most popular excursion destinations in the region, recent discoveries also prove that it is one of the oldest buildings on the Moselle. After many years of renovation work, the castle reopened its doors in 2017. With a barrier-free circular path around the castle and numerous information boards.
Spectacular finds
In June 2012, unusually massive remains of a Roman fortification (fort) were found during routine work on the external fortification (the so-called Zwinger) of the castle ruin Landshut. Archaeologists date these remains, which were integrated into the medieval buildings, to the end of the 4th and early 5th century.

Classification of the finds
The newly discovered wall remains on the castle hill in the Bernkastel district are considerably older than the castle built by Heinrich von Finstingen around 1276, which can still be visited today. They are also of much earlier origin than their two predecessors, which were destroyed or dragged down in 1017 and 1201 respectively.
Based on the results so far, it is possible to reconstruct a rectangular fortification measuring around 60 x 30 metres, in which five or six almost square towers were integrated.
These towers are very unusual in their construction and can hardly be associated with late antiquity or even the Middle Ages. They can only be compared with late Roman forts such as those found in Ludwigshafen or Passau. Two glass and ceramic finds suggest that the walls date from the late 4th or early 5th century. The finds of a stone axe made of clay slate and hand-made shards suggest that they were even used in pre-Roman times.
The castle as part of an overall military concept
So far 19 late Roman mountain fortifications situated above the Moselle can be proven, the castle Landshut is one of them. It probably did not serve as a refuge, but as part of a military concept. In the Moselle valley - at regular intervals - a whole chain of mountain fortifications was built, both to protect the Moselle - which was very important as a waterway - and the new imperial residence in Trier. Emperor Constantius I (293-306) is regarded as the initiator.
The fort in Bernkastel was only partially built over by the medieval core castle - the ruins of which we can still see today. This is why it is the first mountain fortification in the Mosel valley whose perimeter and ground plan are known exactly.

Conclusion:
In the cosmography of the "Geographer of Ravenna", the anonymous author writes: "...Also on the Mosel river...lie the places Trier, Neumagen, Bernkastel, Karden and Koblenz". It was written in the early 8th century, but the geographer used older sources and probably describes the state of the world before the year 496.
In the Latin translation of the original Greek text it says instead of Bernkastel: "Princastellum". This would be to be interpreted as "primum castellum" as the "first fort" - and name-giving for the later Bernkastel.
The newly discovered fort would be one of the few places in the region where an ancient name could be associated with a specific site.
The impressive size of the mountain fortification suggests that the settlement below the castle hill was also very large. In the light of these new discoveries, the age of Bernkastel-Kues must be raised by almost 1000 years. The other Roman finds in the holiday country Bernkastel-Kues also speak for a large population, e.g. the "Roman winepresses" in Erden, Piesport or Neumagen-Dhron. Those who do not want to climb the way to the castle on foot can take a ride on the Burg Landshut-Express.

Please note that the tours are only conducted under the Corona regulations then in force: 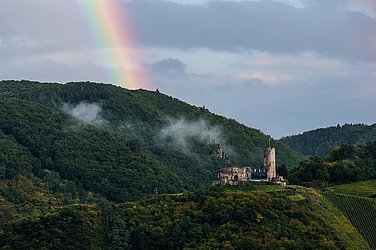