The Heilig-Geist-Spital is the oldest civic hospital in Germany. A building steeped in history, it is part of the cultural heritage of the city of Mainz and has been used for gastronomy since 1863.

In 1236, the Heilig-Geist-Spital was built by Archbishop Siegfried III of Eppstein on what was then the banks of the Rhine. It is built in the late Romanesque style, modelled on Santo Spirito in Sassa in Rome.

There are large portals on all four sides, allowing access from any direction and flooding the rooms with light. The one on the Rhine side, which is also the most magnificent of these four portals, was moved to the cathedral in 1862. The hospitals of the Middle Ages were multi-purpose institutions; pilgrims and the homeless, strangers and the poor, the old and also the sick lived here, although the latter were probably more of a minority.

Under French rule, the Heilig-Geist-Spital was closed from 1804 onwards and subsequently served various purposes, including being used as a magazine and for gymnastics lessons.

In 1863, the Heilig is used for gastronomy for the first time - the Brey'sche Aktien-Brauerei opens a restaurant.

During the air raid on Mainz by the British Air Force on 27 February 1945, the entire city centre of Mainz burns - including the Heilig-Geist. The roof, which was largely burnt off, is rebuilt at the end of the war and the Heilig-Geist establishes itself as a popular dance hall in the 1950s.

In 1975, as part of a restoration project, the Spital, which had been considerably enlarged in the preceding centuries, especially on the Rhine side, is uncovered again. The building is restored to its original Romanesque state. Late Gothic elements, such as the tracery windows, were also removed. The last major renovation took place in 1999.

Today, the building houses a popular restaurant with bar and outdoor catering under the name Heiliggeist, which also hosts events and conferences. The Heilig-Geist is a listed building and is part of the cultural heritage of the city of Mainz. 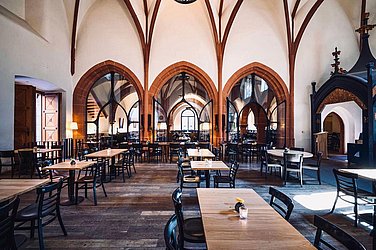 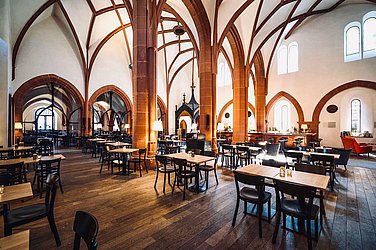 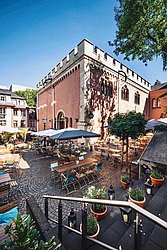