The simple dishes that make up Hunsrück cuisine date back to a time when every piece of farmland had to be carefully cultivated and tilling the fields was hard manual labour. Potatoes were an important staple food in the Hunsrück region to the south of the Moselle, and there was often a battle with nature before they could be harvested. It was all hands on deck for the potato harvest, including parents, uncles, aunts, relations, neighbours and, most importantly, children. The men hacked the potatoes out of the hard soil, the women removed the wilted leaves and collected the potatoes in wicker baskets, and the older boys shook out the baskets in front of the smaller children, who sat in a semi-circle around the big pile and sorted the potatoes by size. And there were fires all around burning off the potato leaves and smothering the proceedings in thick smoke.

Delicious old-fashioned potato recipes are permanent fixtures on the menu during the Hunsrück Potato Festival in October. The most famous potato dish is ‘Schales’: grated potatoes are fried in a cast-iron pan known as a ‘Dibbe’ until a crust forms on the bottom of the pan, then they are turned over.

The recipes are handed down from generation to generation and vary from village to village. This is still the case today, making the Potato Festival a little more interesting, with spuds grated, fried, boiled, steamed and mashed and served up as mash, soup, potato cakes, potato hash, stuffed dumplings or even potato sausages. The regional word for potato, ‘Grumbiere’ roughly translates as ‘ground pear’, as a potato is like a pear that grows underground. Dialectical variations on this in Hunsrück include ‘Grumbeere’ or ‘Krumbeere’.

There are around 30 chefs with dishes featuring Hunsrück potatoes on their menus in October, one of whom is Michael Böhme, head chef at Bergschlößchen in Simmern. He has researched all the old Hunsrück recipes carefully. “As a chef, I like to combine the traditional and the modern, putting my own spin on the regional dishes”, he explains. He invites his guests to enjoy a range of dishes featuring Hunsrück potatoes during the Potato Festival. Of course, these include ‘Schales’, called ‘Hunsrück potato cake’ at the Bergschlößchen, which is his take on the ancient potato dish from grandma’s recipe book. The local potatoes are also perfect in his ‘Alsace potato soup’ with white wine and onions, served in small or large portions with French bread.

After an excursion around the Hunsrück, Michael Böhme’s potatoes stuffed with mince are always a popular choice among diners. Vegetarians can enjoy the potato and porcini mushroom fry with creamy white wine sauce and lamb's lettuce with raspberry vinaigrette. “I am a frying pan chef”, explains Michael Böhme. “I play about with the pan when I am creating new recipes, and toss the accompaniments around.” “Our shopping basket is full to the brim with local produce in autumn”, he reports. Many of the products he uses bear the ‘SooNahe’ regional quality seal for the Nahe and Hunsrück regions. 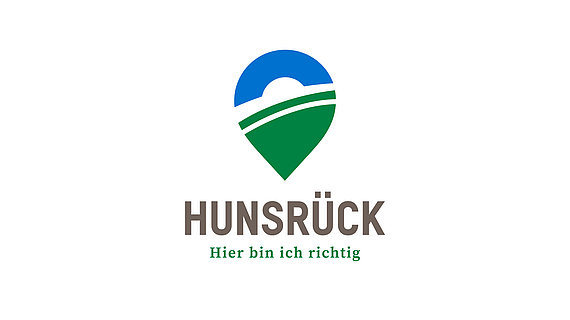 More information about holidays in the Hunsrück

Find out everything you need to know on events, attractions and other destinations in the Hunsrück. 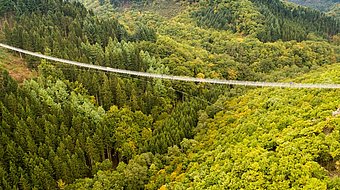 5:00 h
Soothing forests and beautiful brook valleys, that's what we experience on the Saar-Hunsrück-Steig…
read more 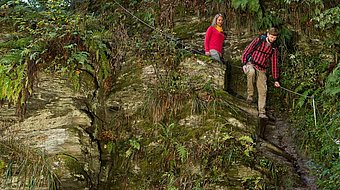 6:00 h
The leg offers an exciting switch from open landscape with great views to the deeply cut gorges of…
read more 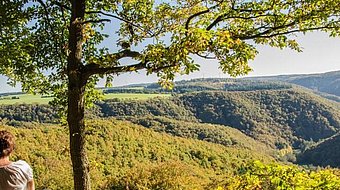 4:00 h
You should leave plenty of time for this leg and be very steady on your feet, because today we are…
read more 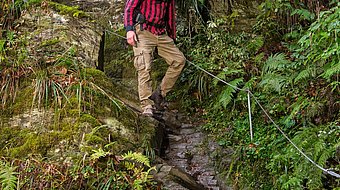 4:00 h
A hike that takes in highlands and gorges to impressively demonstrate how deeply the Baybach stream…
read more 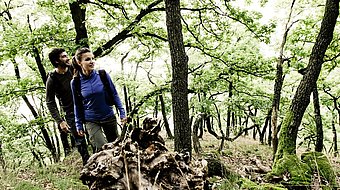 4:00 h
In the Bingen Forest, let your gaze wander to the Rhine and enjoy the hospitality of old forester’s…
read more 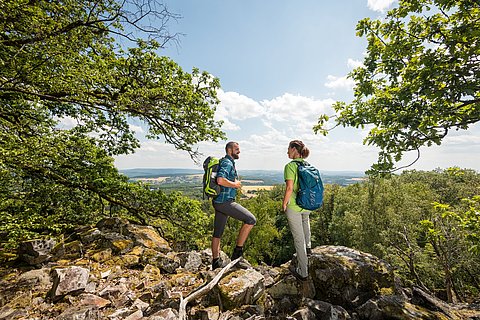 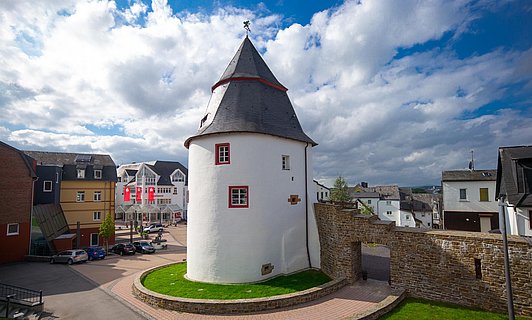 Simmern Simmern´s main landmark bears the name of Germany´s most famous outlaw, Johannes Bückler, known as "Schinderhannes". Due the corona pandemie the tower…