A romantic Christmas in the Salinental valley

In Bad Kreuznach on the Nahe river in the heart of Rhineland­-Palatinate, the healing power of salt is evident everywhere. The first public baths were built in 1817. The spa district with its magnificent villas, spa hotel and gardens was built soon afterwards and still dominates the look of the town today.

The Church of St Nicholas, half-timbered medieval houses and the historic Stadtschreiberhaus, or town clerk’s house, line the Eiermarkt square in Bad Kreuznach, which for centuries formed the heart of the new town. Every advent, it is transformed into a magical St Nicholas market. Instead of eggs, fruit, fish and pottery as in days of old, the advent period sees stalls peddling mulled wine, gingerbread and sausages, providing reinforcements for a wintry wander along the Nahe through the Salinental valley to the district of Bad Münster am Stein-Ebernburg, with its romantic Christmas market in the spa gardens.

Mannheimer Strasse leads over the Nahe, a tributary of the Rhine, to Kurhausstrasse, which goes past the St Paul’s Church and straight into the spa district and the Bad Kreuznach spa gardens.

The healing power of salt is evident everywhere. Salt is extracted from a number of brine springs in the Salinental valley between Bad Kreuznach and Bad Münster am Stein-Ebernburg that form the heart of the long tradition of spas in the town. In graduation towers of up to ten metres tall, the brine trickles down through blackthorn hedge walls to form a salty mist.

This is why the valley is also known as the largest open-air ‘inhalatorium’ in Europe. Visitors from all over Europe strolled around Badewörth island in the 19th century. Among them were German kings and kaisers, and big names the likes of Ludwig Uhland, Johannes Brahms and Hoffmann von Fallersleben.

Christmas market in Bad Münster am Stein-Ebernburg with Rheingrafenstein in the backdrop, Nahe valley

From the spa district, there is a bridge to the other side of the river and a footpath between the vineyards and the Nahe to the town of Bad Münster am Stein-Ebernburg. The path leads past the first mercury tunnels in the world, from which the mercury extracted was used for pain-relieving radon therapy.

The closer you get to Bad Münster am Stein-Ebernburg, the narrower the Nahe valley becomes. Tall cliffs line the valley and the Nahe bubbles and races through the river bed. There are rows and rows of vines at the feet of the porphyry cliffs. The highest, steepest cliff in the massif is the Rotenfels. The reddish colour that gives it its name comes from rhyolite, a porphyritic stone.

As soon as it gets dark, the Christmas market in Bad Münster am Stein-Ebernburg is a must, with thousands of bright little lights shining in the spa gardens, sparkling in the tops of the grand old trees and tracing the outline of the historic spa centre. The floodlit Rheingrafenstein castle forms an impressive backdrop. There are over 100 market stalls in the spa gardens, the pump room and the spa pavilion, selling wooden toys, metal garden ornaments, little birdhouses made from corks, advent decorations and Christmas wreaths. The mulled wine comes from the local Nahe vineyards and there are all sorts of sweet and savoury treats to enjoy.

More information about holidays at the Nahe

Find out everything you need to know on events, attractions and other destinations in the Nahe valley at the Naheland-Touristik GmbH.

Bad Kreuznach The bridge houses in the centre of Bad Kreuznach are the landmark of the spa town on the Nahe river. They are 500 years old and stand on the pillars… 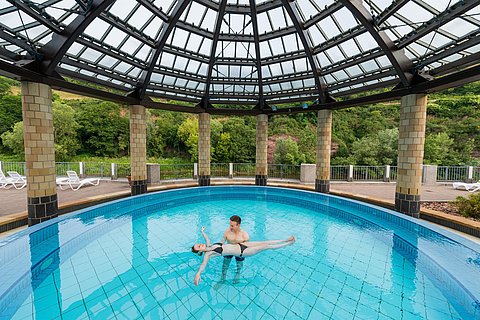 Bad Kreuznach The Crucenia Thermal Baths are a place for health, relaxation and pleasure for all generations. Characteristic for the thermal bath is its unique…

Bad Kreuznach Ebernburg Castle, one of the most famous castles in the Palatinate, rises picturesquely on a promontory above the village of Ebernburg above a…

Odernheim am Glan The ruins of the former monastery of Saint Hildegard of Bingen are located in charming surroundings. 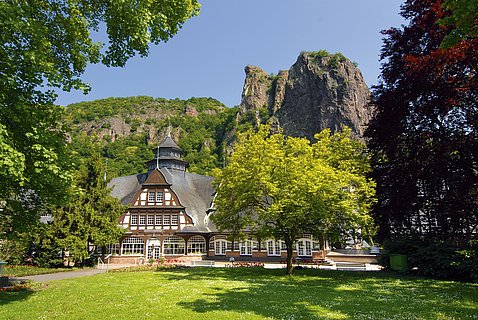 Bad Kreuznach The Spa House in the spa gardens of Bad Münster am Stei is one of the most beautiful spa houses (Kurhaus) in Germany. It is located directly on the…

Bad Kreuznach The huge porphyry massif is the highest cliff face north of the Alps with a height of 327 m above sea level on a width of approx. 2 km. From here you… 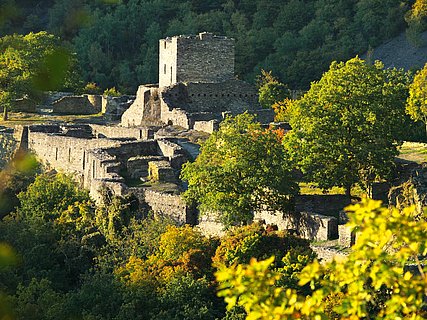 Schneppenbach The oldest castle complex in the Nahe and Hunsrück region is the Schmidtburg ruin in the Hahnenbach valley. It is one of the largest ruins in the… 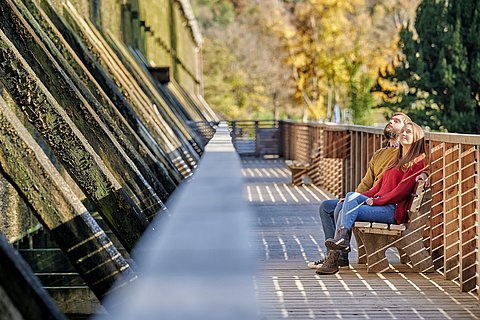 Bad Kreuznach The Salinental - Europe's largest open-air inhalation park - is located between Bad Kreuznach and Bad Münster am Stein-Ebernburg. The park has a total…